Texas Hold’em Poker has been one of the most popular card games in the word for some time now, with millions of people playing both online and live poker games. With such a strong following, the game has developed plenty of its own lingo, with a lot of these terms used specifically in Texas Hold’em Poker.

Learn all of this different poker jargon and you will become a poker champion in no time! 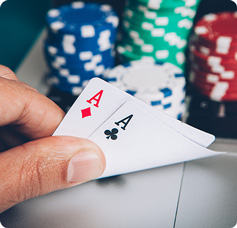 All-In - a player bets his entire pool of chips.

Bad Beat - a player is beaten despite holding a very strong hand. This can either be from very poor betting strategy/play, or just terrible luck.

Blinds – these are required bets made before the cards are dealt. Blinds are Texas Hold’em’s version of the classic 'ante'.

Big Blind – a required bet that must be made by the player sitting two seats to the left of the dealer. The value of the big blind is also the minimum bet for the entire game.

Blockers - these are cards in your possession that prevent other poker players from forming any type of set.

Bluff – a strategy employed by someone pretending to have a stronger hand than they do in order to scare off other players.

Board - Another term for community cards as a group.

Button – this indicates the position of the dealer in any given hand.

Buy-In – The fee needed to pay to enter a tournament or poker game.

Community Cards – cards that are dealt to the middle of the table that can be used by anyone in the hand to combine with their hole cards.

Check – an action intended to indicate a player’s intent to stay in the round, much like a call, but without any monetary bets. Can only be done if there are no bets on the table for that betting round.

Call – sees a player match another player’s wager by betting an amount equal to the other players’ bet, keeping the player in the round.

Cash Game - a poker game in which actual cash values are used as bets rather than just to keep score. This type of game is also known as a 'ring game'.

Draw - a hand that is just a card or two away from forming a complete poker hand.

Early Position - position is key in poker as it refers to your current position in relation to the dealer. The first few players on the left of the dealer are known to be in Early Position. These players are first to act pre-flop.

Flop – this term refers to the first three community cards that are revealed together.

Fold - an action a player undertakes by discarding their cards, to take them out of action from the hand completely.

Gutshot Straight Draw - a straight draw that needs the middle card to complete it. A metaphorical shot in the gut.

Heads-Up - when a hand or an entire game is played between two players only.

Hole Cards – the two cards that are privately dealt to each player. Also known as 'pocket cards'.

House – the host of the poker game.

Kicker – the top cards of a hand not involved in a set that can be used to decide a winner between identical hands.

Late Position - this refers to players to the right of the dealer. Late position players have the most favourable position when it comes to pre-flop betting as they can draw their conclusions and assumptions through the bets that were made before them.

Late position players often try to steal blinds when a hand is looking like it has weak players in it.

Limit Game – a variation of Texas Hold’em Poker where players are not allowed to go “all in.” Players can only bet using the value set for the big blind.

Limping In – when players just call a big blind to stay in rather than raising. Often seen as a sign of weakness in poker.

Muck – when a player decides to not reveal their cards to the table after losing a hand.

No Limit Game – the most popular version of Texas Hold’em Poker. Players are free to bet any amount they choose in No Limit games.

Nuts – the best poker hand possible given the cards dealt on the table.

Off Suit – cards of different suits.

Open-Ended Straight Draw - a straight draw that needs either of the bookend cards to complete it. You have two outs as you can win with both the high and low cards of a straight set. Essentially the opposite of a gutshot straight draw.

Outs – the cards that will help a player win a hand.

Pre-Flop – all actions that take place before the flop is revealed is known as the pre-flop.

Raise – a player bets an amount that is bigger than the previous bet, thus raising the minimum bet for all those remaining in the hand.

Rake – a percentage taken from the pot, to be paid to the host of the game.

Showdown - the point at which all players remaining in the hand turn their cards over and determine who has the best hand after the final round of betting.

Side Pot - since players can only win the amount they bet, side pots are created when a player does not have enough chips to match a bet made, but other players can.

Slow Playing – a strategy employed by a player intentionally playing a strong hand passively in order to keep other players in the game. Also known as 'sand-bagging'.

Small Blind - the smaller of the required bets at the beginning of Texas Hold’em Poker games. Often, the small blind is half the value of the big blind.

Split Pot - sees a pot shared between players who have the same value hand.

Stack – this refers to all the chips a player has on the table.

String Bet - a big no-no in live poker that surprisingly happens a lot thanks to theatrical depictions of poker. String bets are when you fail to make your bets in one motion or one direct statement. Example: 'I call your 50 quid… and raise you 50 more!'

String bets are considered unacceptable because you are making an ambiguous bet and bets need to be clear. It also opens yourself up to the possibility of intentionally trying to get a reaction from your opponents to gain information regarding their hand.

Tell - a clue or hint, often a physical action, that a player unknowingly gives about the strength of their hand.

Tilt - a player on ‘tilt’ is someone that is letting their emotions get the better of their decision-making. A few bad beats can force even the best players to go on tilt.

Under the Gun - this is the first person to act in any betting round.