The popularity of online poker rose in the early 2000’s due to several combining factors. The internet had advanced to a stage where secure payments can easily be made online, which led to an increase in the amount of online poker websites. This rise reached its climax when televised high-stakes poker tournaments were starting to be won by online players who had qualified through online tournaments.

Since then, the game has reached new heights for both live and online games. While both formats are extremely popular, there are key differences between the two that almost makes for two completely different games.

The first key difference between the two is the pace of the game. Online poker is significantly faster than a live poker game. Since the game is faster, online players see significantly more hands than live players - this is also due to the fact that the majority of online players prefer to play more than one table at a time. The ability to ‘multi-table’ is another key difference between the two. This means that winnings for individual players also increase exponentially through ‘multi-table’ sessions. 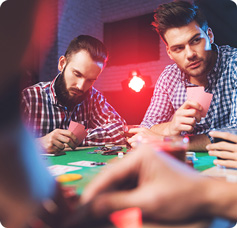 Another key difference is that offline play allows for more of the psychological aspect of poker to come into play since ‘reading’ your opponent becomes a very important weapon in your arsenal. Being able to see your opponent’s physical behaviour might lead to clues or important ‘tells’ that can help inform important decisions.

In online poker, there are no physical tells and clues to read nor physical actions you can make to influence the other player. The only way to read a player is through their betting patterns – how long they take to make a bet, and how much. Even then, without the physical aspect of the game, such reads are more based on assumptions rather than observations.

Despite online poker players playing considerably more hands than live players, there is still less risk with online play since buy-ins are usually much smaller than live play tournaments.

In online play, you have the choice of which table to sit in based on the different requirements and rules of that table. There are usually a lot more options in online play when it comes to smaller budget buy-ins.

Of course, the main attraction of online poker if you ask most players is the convenience of it all. Live poker rooms can be an intimidating place, especially for beginners. Online poker sites allow for many users to learn the game without the intimidating nature of live poker games. The best poker sites also usually have a play money option, where you can hone your skills without losing real money.