How to Play Texas Hold'em Poker

Texas Hold’em is the most popular form of poker played today, both online and in live games.

This version of poker entered the mainstream once they started showing high stakes poker tournaments live on television, after which the game took off in popularity - with it now being played by millions of people all over the world, both on and offline.

We have created an extensive how to play Texas Hold'em Poker guide for those new players still getting the hang of the classic game.

1. Each player is dealt two private cards known as the 'hole cards'.

2. The dealer then deals five cards face-down to the middle of the table, these cards are known as 'community cards'.

4. Throughout the progress of the hand, the community cards will be revealed in batches, which are separated by rounds of betting. The first three cards are revealed at the same time – these cards are known as 'the flop'. The fourth card, also known as 'the turn', is then revealed. The fifth and final card that is revealed is known as 'the river'.

5. Whoever has the best poker hand among those still playing the round will win and collect all of the chips in the middle of the table.

Most advanced poker players will tell you that the key to really learning how to play poker properly is to study the betting part of the game. Betting is arguably where the game really begins for Texas Hold’em, both in live and online poker.

A round of betting takes place when the players receive their hole cards. Bets are then taken from players before the community cards are revealed.

A round of betting takes place after the first three community cards are revealed.

Another round of betting takes place after the fourth community card is dealt.

A final round of betting takes place after the final community card is drawn. 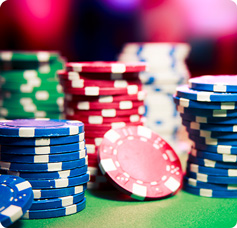 There are many different variations of Texas Hold'em Poker available, which are listed below.

Make sure you read the rest of our how to play Texas Hold'em Poker guides to learn more about the game of online poker.